Introduction
As a driver you will encounter junctions known as crossroads. Crossroads are a place where two roads cross. It is important you learn the priorities at crossroads and how to deal with them safely whether you are driving on the major road or emerging from the minor road. 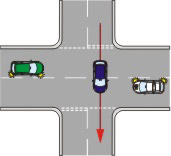 Firstly, traffic may emerge from either side road and cross your path. Although you have priority you must be prepared to stop if this happens. This may also occur when you intend to go ahead which is why you always take extra observations into the side roads of a crossroads before you pass.

Secondly, when turning right you may be faced with an oncoming vehicle also wanting to turn right. In this instance neither vehicle has priority. Usually vehicles turn nearside to nearside in this situation although offside to offside is safer, because you can see oncoming traffic before turning. Road markings may also dictate which method is used. 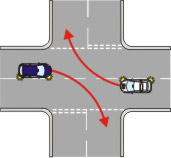 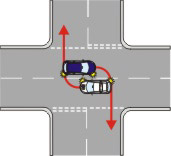 If the side roads are too narrow for either nearside to nearside or offside to offside you might have to give way to the oncoming vehicle turning right, as shown in the following examples. 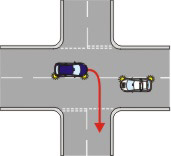 Similarly if a large vehicle was turning right you may need to give way if insufficient space is available. 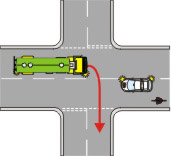 However, in such situations be careful not to beckon the oncoming driver to turn as you may be being overtaken on the nearside.

Emerging at crossroads
If no vehicles are emerging from the road opposite, emerging to the left and the right is identical to T junctions. However, be prepared to take advantage of opportunities to proceed as a result of the vehicles on the major road slowing down to turn into the side road opposite.

Priorities
The general rule for priorities when emerging from crossroads is that right turning traffic should give way to oncoming traffic. The vehicle with the priority in the following examples is the same as if the two minor side roads were one major road, however do not assume that the other driver will comply. 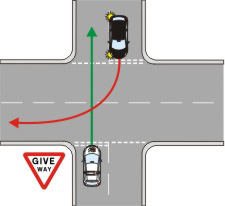 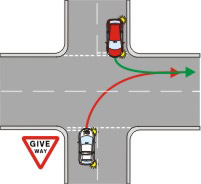 The diagram below shows that no one has priority in this situation. The driver to arrive first would usually proceed first but you need to watch carefully to see what you think the other driver will do. 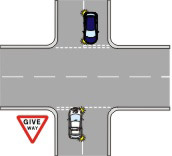 The situation in the diagram below shows the red car's progress is blocked by queueing traffic therefore you may proceed despite not having priority because the red car will probably give you priority. However, make sure this is the case. 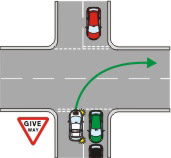 As the driver of the red car will need to take extra observations due to the bushes around the mouth of the junction, you can turn without impeding the driver. 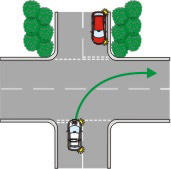 Emerging at unmarked crossroads
Neither road is the major road therefore proceed with extreme caution and be prepared to stop. Anticipating the actions of other drivers and driving at a speed that enables you to stop is critical. Priority regarding oncoming vehicles is not changed. 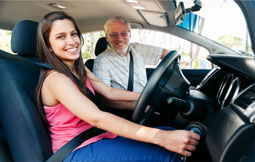 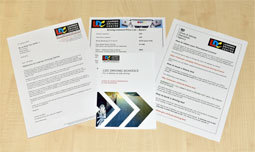 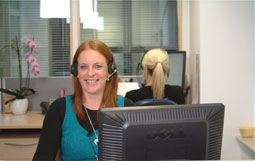