Introduction
When driving in a busy town or city centre you will encounter one way systems; bus, cycle and possibly tram lanes; and various parking restrictions.

Traffic queues
In town and city centres you often find traffic queuing. Therefore don't expect the road ahead to be clear. Traffic queues can sometimes make it difficult to get into the correct lane. Therefore you should always try to get into your designated lane as early as possible. However, even with the best planning there may be times when you might signal to change lanes and rely upon the courtesy of another driver to allow you to merge in front of them. In this instance the signal becomes a request to merge rather than a signal that you intend to immediately change lanes. However, you must continue to allow traffic to flow in your current lane and be prepared to abandon your manoeuvre if no one lets you in.

If someone signals to merge in front of you make sure they have seen you and that their actions are consistent with a request to merge rather than an intention to immediately move across. Then if it is safe to give them priority do so. Courtesy and common sense plays a very important role in town and city centre driving.

While queuing you have to particularly watch for pedestrians coming onto the road in front of you and for cyclists or motorcyclists coming up either side of your vehicle. All round observations and awareness are critical when in queues of traffic.

One way systems
To help improve the flow of traffic around town and city centres one way systems have evolved. Roads that at one time may have clearly been designed to have traffic flowing in both directions may now only allow traffic to flow in one direction. This can at first be a little disconcerting as you may find yourself driving on the right hand side of the road.

Bus, cycle and tram lanes
Many town and city centres now cater for buses and cyclists by providing specific lanes for such traffic. Some also cater for trams. Cycle lanes are usually protected by a solid white line that should not be crossed. Special care must be taken if you have to cross a cycle lane when turning left or right. Areas of the road may also be designated for cyclists. 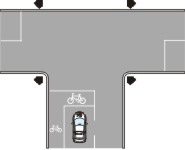 Bus lanes may or may not be for the exclusive use of buses. If there are only certain times when buses have exclusive use of such lanes road signs will clearly state this. Outside of these times normal traffic may use them.

In an attempt to reduce the traffic congestion of city centres some councils have adopted modern tram systems. You should always be prepared to give way to trams as they cannot stop easily and cannot be steered. The metal tracks or rails also present a hazard as they can become slippery when wet.

A simple rule to remember is - the more paint there is the greater the restriction. Always look out for the yellow or blue plates that give details of the limitations on parking.